Die Wirtschaftswunder were a unique German-Italo group featuring the crazed vocal work of the Sicilian Angelo Galizia. His backing group was the Czech songwriter Tom Dokoupil (Siluetes 61, Die Partei, Die Radierer), Canadian Mark Pfurtschneller on synths, and the German percussionist Jürgen Beuth (also the songwriter with Die Radierer). Great stress was placed on the group's origins in the small town of Limburg, the capital of the district Limburg-Weilburg in the west of Hesse. Recorded in Dokoupil's small home studio, the 1980 C-50 cassette sampler titled Non Dom, a Wirtschaftswunder, Die Radierer, and Siluetes 61 triple header (available via mail order and at early gigs), all groups from in and around Limburg, featured a cover drawn from the 600 year old Lahn Bridge overlooking the Limburger Dom cathedral.

(It would be interesting to hear from any German fans in regards to the group's lyrics, artistic message and/or politics, if any. I am guessing the group led a wry commentary on the Soziate Marktwirtschaft, and how its aims of a 'socially conscious free market' never actually lived up to the so-called 'miracle' that the Wirtschaftswunder created for the post-war German economy. This would need verifying, though I know many groups at the time supported the likes of RW Fassbinder's film work, and his examinations into the kind of cultural hollowness at the heart of the German economic miracle, Einstürzende Neubauten being the finest example of Berlin's urban blues of the late 70s and early 80s. Sound-wise, Wirtschaftswunder had a Dadaist/ Doktor Caligari combined vibe, reminiscent of Cardiacs' warped seaside-fairground sound in Britain, that was being practiced and recorded to tape around the same time in the early 1980s.)

Die Wirtschaftswunder's big break came when they landed a slot playing alongside Fehlfarben and Östro 430 as part of a series of gigs organised at Düsseldorf's legendary Ratinger Hof venue in July, 1980. Frank Fenstermacher witnessed the concert and soon flew to Limburg with his fellow label and Der Plan colleague Kurt Dahlke to arrange the group's first EP release on Warning Records, aka Ata Tak, in 1980. It featured two of their most punk inspired tracks Allein and Don't Listen. 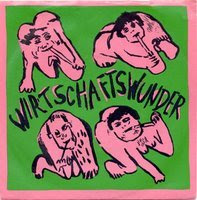 By this time the Non Dom cassette sampler had been quietly causing a stir due to the promotion and distribution of Alfred Hilsberg's Rip Off shop, and its mail order catalogue service. Hilsberg had plans to document the emerging Limburg post-punk scene, and so brought Wirtschaftswunder over from Ata Tak to his ZickZack label based in Hamburg. The subsequent Die Limburger Pest 3 x 7" pack grouped Wirtschaftswunder's next single, the Television & Kommissar/ Ein Meadchen auf der Strasse 7", together with Die Radierer's Angriff Auf's Schlaraffenland and the one-sided flexi Wo Ist Der Dom? by Siluettes 61, a creative Tom Dokoupil side project, once again making use of the iconography of his town's cathedral with both its sleeve and the song's subject matter. Evidently, the nutty detective piece on the b-side to Wirtshaftswunder's Television single, Der Kommissar, takes its title from the German TV crime series of the same name, and goes so far as to re-work Herbert Jarczyk's jazzy title score from the 60's, even sampling voice extracts from an episode appropriately named Tod eines Hippiemädchens. This actually became an underground hit, lingering in the Sounds indie charts for several months, and for good reason.

Tom Dokoupil went on to produce several radical experimental works solo, utilising all manner of found objects and instruments, including the vocoder, for sound collages such as his debut LP for ZickZack, Überrollt. There was also another Dokoupil solo album put out in 1981 called Wat? Sanitär! which was ZickZack's second cassette release. He'd later team up with Walter Dahn to become Die Partei. Check the first part of the Mein Walkman mix tape for an incredible Die Partei track that pre-figures the programmed electronica of Aphex Twin by a good 15 years. As for The Wirtschaftswunder debut long player, here's three great numbers from the 3-Klang Records/ Line Music CD reissue of the Salmobray LP (ZickZack, 1980): 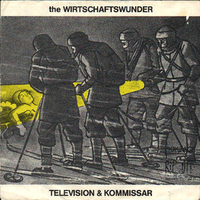 I understand Angelo Galizia's vocals were often incomprehensible, his Canadian origins more often than not producing a sort of German babble speak. This furthered a real sense of Dadaism already lending itself to the cut-up text and artwork, in conjunction with the music's left of centre stance. Sound-wise, Wirtschaftswunder had a Dadaist/ Doktor Caligari combined vibe, reminiscent of Cardiacs' warped seaside-fairground sound in Britain, that was being practiced and recorded to tape around the same time in the early 1980s.

During this spell, Wirtschaftswunder, and several other experimental NDW groups and artists, were being parodied by Xao Seffcheque on the infamous Sehr Gut Kommt Sehr Gut prank compilation, which can be found as part of WFMU's Audio Hoaxes and Urban Legends post. After a brief collaboration with Wolfgang Luthe for a punk fanzine flexi-disc, the group's major label debut landed on Polydor, worth picking up, if only for the excellent DAF inspired number they titled Kopfgeldjäger ('Head Money Hunter' [sic]). However, there was a slight sense that the freewheeling punk spirit of the earlier work was slowly starting to be fizzled out by Polydor. 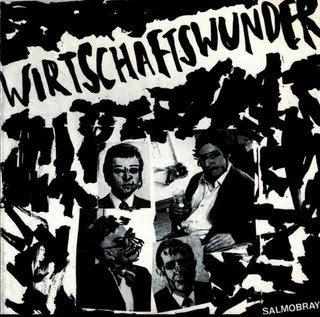 Wirtschaftswunder's name suggested a wry commentary on the Soziate Marktwirtschaft, and how its aims for a 'socially conscious free market' never actually lived up to the so-called 'miracle' that the Wirtschaftswunder created for the post-war German economy. I know many groups at the time supported the likes of RW Fassbinder's film work, and his examinations into the kind of cultural hollowness at the heart of the German economic miracle. The Mondpalast cinema in Lindburg was an important meeting place for the local scene's art students, especially the venue's bar, which often featured live gigs from politically charged groups in the area, Nylon Euter and Korpus Kristi among them. Wirtschaftswunder attempted to rescue some of their experimental edge back by releasing the eclectic soundtrack to Gabor Altorjay's Tscherwonez film through Polydor. Here is Die Flucht from that LP, the rest of which seems to travel musically across the globe. Tscherwonez was a black and white Super-16 film from 1982 that featured both Tom Dokoupil and Angelo Galizia in major roles. The movie's style also happened to anticipate some of the Soviet aesthetics creeping back in to experimental German film of the late 80s. But really, as for the Wirtschaftswunder sound, by 1984's predictable Pop Adenauer LP, and the slick mid 80s white-boy funk of its accompanying Pizza single, Wirtschaftswunder's edge was finely being chiseled off and polished up for the New Pop era, that dubious Warhol inspired post-punk theory about going for gold and beating the pop charts at its own game. But that's another story altogether.

I would very much like to hear from anyone willing to offer sound clips of Tom Dokoupil's cassette release for ZickZack, or the record he produced later on under the name Quick Culture. For a far more in depth overview of the Limburg post-punk scene, please consult this wonderful essay published by the good people at Belchluft, which helped considerably with the latest revising of this post. 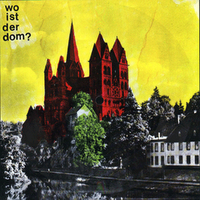 Jörg said...
You beat me on the Wirtschaftswunder post, but I will post Television soon.
Thanks for the link to Xao's record! As i said I saw it in record shops but didn't buy it.
The Tscherwonez song btw is called "Die Flucht". This film was shown on german television in 84, a story about soviet sailors and their adventures in Hamburg I think. If I remember it correctly Tscherwonez is a russian gold coin. Tom Dokoupil played a russian sailor looking for his brother in Hamburg, followed by the KGB.
Thinking of this movie makes me think of "Die letzte Rache" by Rainer Kirberg with music by Der Plan and lots of funny decorations by Moritz Rrr. Maybe I should get this LP into the net?
Keep on, there are songs on your blog even I have never heard of. I think to get the old issues of Sounds and SPEX from my Kinderzimmer. (download) 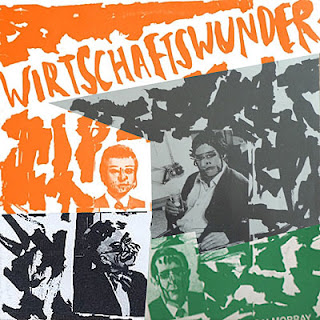 Update 2016-04-27:
The original posting of the Mein Walkman Ist Kaputt-Blog from 10 years ago only offered 3 tracks from the Salmobray-album (Schein, Stop Talking and Marktwirtschaft), so I offer here a complete rip from the CD. Enjoy! (Still don't know what "Salmobray" means...)

I have just finished a music publication on zick zack records. It features an interview with Wirtshaftswunder if interested contact me at

Looking for the Non Dom cassette -- would be greatly appreciative if someone re-ups and posts the link!