Now is the time to post an NDW party anthem (no, we're not talking Falco here). This is the Italian 12" version (Ariston Music) of the 'Grund und Ordnung' single by Weltschmertz, although I've had to steal both tracks from the 1982 LP, because I've yet to locate a copy of the 12" single with a reasonable price tag. The 'Grund und Ordnung' 7" features 'Astronaut' on the flip instead of 'Gala der Stars', and, though it's still better than the rather dated New Romantic-ish 'Sehnsucht aus Beton'/ 'Steinzeit' 45 (both tracks also on the LP), it's the 12" version of 'Grund und Ordnung' that's the one to get. I highly doubt any DJ's are playing this one out these days! Weltschmertz were a trio comprised of Barbara Schewe, Clemens Clemenzone, and Xaver Aahorn. The scan above is from the LP on Achim Reichel's Ahorn label, just to confuse matters, and there's also a Metronome Italian pressing (looks like they had the odd fan or two in Italy). It's a silly album, and well worth getting if, like me, you're having trouble finding the 12" single version. 'Grund und Ordnung' translates directly as 'Reason and Order', and the bizarre name-dropping b-side seems to have no logic or end in sight. Shameless fun. 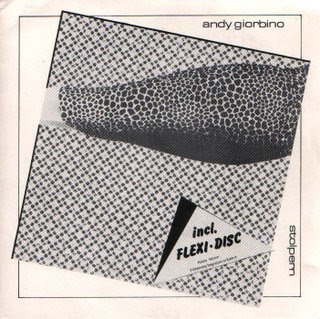 Definitely Giorbino's greatest single. Andy Giorbino was a major player in the early 1980's Hamburg avant-garde scene and a fine contributor to Alfred Hilsberg's Zick Zack label (see the Grosse Freiheit single, below, for more ZickZack). This is number 032 in the label's back catalogue. Original copies came with a free 7" flexi-disc, featuring a live recording of Giorbino's performance group called Radio Moon, with the dancer Gitta Luckau, titled 'Lebendig Begraben in Köln' ('Buried Alive in Cologne'). My version is missing the additional flexi vinyl (maybe you had to send off for it?), but not to worry, it's both the a-side and b-side of Stolpern that are most important here. This is a real underground classic Neue Deutsche Welle single, just before the major labels caught on and capitalised on the New Wave sound, ultimately destroying the punk attitude and experimentation that made the movement so vital to begin with. All the more reason, then, to treasure works like this from the early 1980's period. Take a listen.

(…) Lorenz Schröter's Lorenz Lorenz performance group, their most famous piece being '3 Minuten Ei', three minutes of Lorenz screaming 'egg', a performance of which was included in Richard L. Wagner's (Sounds writer) Dreiklangsdimensionen Teil 1 & 2: Dokumentation über die Neue Deutsche Musik, a TV documentary from 1982 for BR (Bavarian television), which allegedly received many viewer complaints. A performance of '3 Minuten Ei' from the Kreuzberg SO 36 venue can be found on the Berlin Super 80 DVD. Lorenz's 'Honecker In Cambodia' can be heard here. (…) 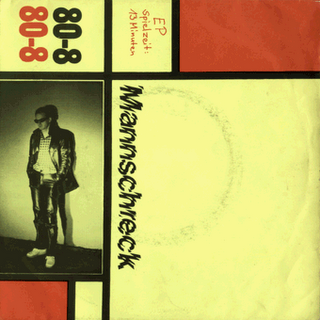 Mannschreck was a New Wave project put together by Günther Mannschreck from his own Mannschreck Tonstudio in the greater Stuttgart area, about 200 km from Munich. Herman Kopp recorded his 1981 Aquaplaning In Venedig album in these studios, and the Stuttgart punk group F.A.K. also made use of the premises, releasing their self-titled debut EP on Günther's own Schreckschuss Records way back in 1981. This, however, is the pre-Schreckschuss label DIY debut from Mannschreck, the 80-8 EP, from one year earlier. The four tracks alternate between Günther's, rather dry, vocals and Lilo Gasparitsch's more wild delivery. This 7" apparently didn't cut it with Alfred Hilsberg, whose scathing review in Sounds at the time may have encouraged the rawer and edgier sound of the second 'Beiträge zur Sinnespflege' 7". True, the two Günther vocal tunes 'Made In The USA' and 'Depression' are best forgotten about, though, in hindsight, this is by far the better of the two early singles. Mannschreck's version of 'Where Have All The Good Times Gone', that rare Kinks b-side from 1965, rescued by David Bowie in 1973 on his Pin Ups LP, is surely ripe for rediscovery. Even better is their own composition 'Walking In The Human Mud', again with Lilo on the mic. I'm guessing the subsequent Ou-Wou-Wou and Metromania 12"s were a little more polished sounding. Drop a comment here if you recommend their later work, I'll be sure to check it out, and keep an eye open for future Schreckschuss/ G. Mannschreck related posts. This was a great independent label that even the good folk over at Information Overload have yet to fully document.

02. Where Have All The Good Times Gone
03. Walking In The Human Mud

well...
schreckschuss released the following records (as far as i know):
280854 Mannschreck - 80-8
280855 Partner der Welt - Moderne Zeiten
280856 Mannschreck - Beiträge zur Sinnespflege
280857 F.A.K. - Verzweiflungstat 1
280858 Mannschreck - Tag für Tag
280859 Pascal - Rendez-vous Europe
280860 Die Lennons - Die Wahrheit über Claudia
and there are lot of other small german labels which only released a few records like SUPERMAX with 4 12"s from Borsig, Mona Mur, Flucht Nach Vorn and Christina, UNSER ANGEBOT with 2 7"s from Rex Dildo and Der Favorit, then there is NIELSEN 2 with records from Vorgruppe and Disque Omo and AROMA PLUS with releases from Max Goldt and Foyer Des Arts, so it takes some time to write about all these small labels...
Mannschreck also recorded the Beerdigung/Tollwut-Split-LP but gets bad credits from both bands for spoiling the sound... (download)
Eingestellt von martinf um 00:16

"Mannschreck 80-8" ! Oh, that brings back memories... Back in the early 80s I was a French teenager holidaying in Germany. I went and tried to find some interesting stuff in the record shop. What I found was Geisterfahrer (a bit too bleak and rough for me...), Der Moderne Mann (hey, modern beach-themed songs... in German!) and this. Guy dressed in leather, with wraparound sunglasses and a snark on his face? Colour scheme by Stabilo Boss? Hmm, that must be punk music. But... punks with synthesizers! That was the magic word for me at the time. And the music didn't disappoint me. And I loved the song "Made in USA". I introduced it to my friends and played it at parties. German electronic reggae, how could I resist! And lines like "Texas is taxes, and Kansas is cancers"... well, perhaps it's not a very good pun, but I found it very funny anyway.

Now I'm glad to learn that the guy is still in the music industry.

Please could you also put the remaining 2 songs online... ?

Sorry Christophe, that is one of the records I don't own and as I wrote in the posting, the words and files were originally posted by the "Mein Walkman Ist Kaputt"-Blog, so I can't help you with the missing tracks. Maybe someone else will?