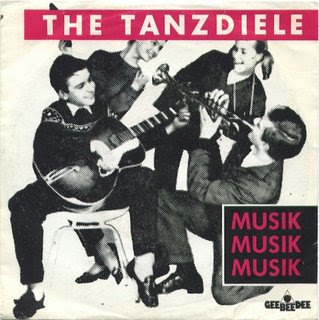 Led by comedian/ author/ actor Peter 'Piet' Klocke, The Tandiele (The Dance Hall) was Klocke's studio project from the Ruhr district of Germany, Essen, before they had to change their name, apparently due to legal reasons, to Die Tanziebe (The Dance Thieves). With Tanziebe, they scaled down mainly to a three-piece group (Klocke, Norbert Woike, and Achim Grebien), removing the electronic element, and releasing a live album, following the success of Tanzdiele's debut Folgt den Führern! (Follow The Leader!) LP for GeeBeeDee back in 1982. This is the one single from that record. Munich's Gomma label brought it back to light in 2002, by including the A side on the first Teutonic Disaster compilation, in amongst other lost relics of the era such as that excellent Am Abend Im Land Der Träume track by 50 Tabletten. The New Wave project known as Carmen was also featured on the comp, which Piet Klocke happened to write for. Other pre-Tanzdiele groups for Klocke were Kamikaze Orkester and Gesundes Volksempfinden, the latter producing 1981's half decent self-titled record for the Ahorn label. Klocke went on compose film music, soundtracking several Richard Claus films, and play small acting roles for film and German television, including his part in the comedy program Hip Hop für Angestellte. Is his comedy any good? Musically, Klocke's Tanzdiele project was so great, I've upped it at 256kbps in celebration.