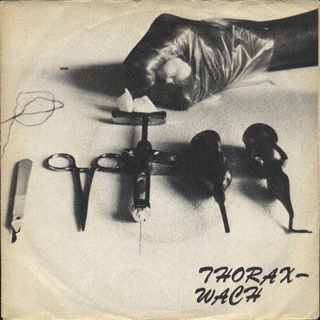 In the early eighties, it seemed Germanic groups produced a lot of what is now called 'minimal-synth' or minimal-wave' music. And with every new movement there are precursors. West Germany happened to have a native tradition of visionary electronics to fall back on, from Stockhausen through to Czukay up to Kraftwerk, pioneers, I should add, who had very little in common with these two teenage pranksters. Yet Thorax-Wach happened to represent one of hundreds of early groups documenting, without knowing it, a major turning point in the history of electronic music. For better or worse, technology quickly fell into the hands of the unacademic, untutored, but inquisitive new generation of kids, raised on the excitement punk generated amongst the youth, especially in its DIY opportunities. Vintage synths were handed down somewhere along the line, or cheaper alternatives were picked up flogged off the backs of lorries.

A further shift in dynamics from what came before was how electronics became the tool to reflect a sense of urgency and panic out of the sheer pace of life and technological growth racing towards the eighties, coupled with punk's fearsome annihilation of the hippy movement altogether. The kind of major label utopian electronica of the New Age (what happened to Ash Ra Temple for instance), a 'nostalgia for the future' David Toop once talked about, was completely at odds with the street level rawness and anti-spiritual vibe of the German New Wave scene, shoving its way out from punk's failings. These failings seemed to resonate with German art school students the most. One thing new German groups certainly didn't want to do was emulate the Chuck Berry Americana of the Ramones. Kraftwerk had already made famous their unflinching interpretation of West Berlin as a grey, cold, and decadently fashionable city of the future, and one that Lou Reed, Nick Cave, Steven Stapleton, Brian Eno, Iggy Pop, David Bowie etc. would all flock to or visit at some point. Minimal-synth took this deliberately dry and detached approach back into the underground, from where it once originated, and presented a far more dark and dystopian view of both popular culture and the socio-political climate of the times, and with a knowing smirk.

Punk's simple liberating conceptions reached all neighbourhoods, even the German ones. From the small northern town of Göttingen, which also produced the New Wave groups Katastrophentheorie and Der Gegenschlag, came perhaps the most prolific duo from that area, Thorax-Wach. They produced only pure 2-track no nonsense DIY, with two Korg MS-20's and a microphone. Frank Dieckmann and Olaf Krämer self-released their first record on their own label creation named Schnellschnitt, in early 1980. A demented LP clocking in at a grand total of 11 minutes. It was titled Kaum Erdacht Schon Mode, which translates as something like 'only just thought-out, already fashionable' (I think). I much prefer its comical sleeve, an old photo of a large family crammed into a 3-wheeler, over the 7" and its imagery of doctor's apparatus. The cover to this 7" has got that stuffy 80s Gothic edge that was never a place that I discovered this music from, and by 1981, their C30 tape reached new creepy heights with songs about bodily functions, the elderly, eating children, and famous serial killers that were shocking the German nation at the time. Still, it's with this earlier single, co-distributed in accordance with Alfred Hilsberg's Rip Off shop, that is the duo's most finely inspected dissection of the commercial structure and instrumentation of early New Wave music. 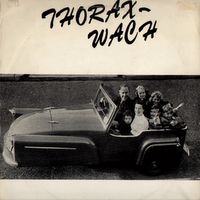 The duo relocated to Berlin, working by day in the Zensor record shop, and by night, running amok amongst the agile underground Berlin scene. Their Der Moderne Luftkampft side project featured on the live at the S036 compilation Licht & Schatten. Olaf Krämer went on to form Die Goldenen Vampire, Germany's answer to The Cramps, whilst Frank Dieckmann settled for becoming a teacher. 'Art damaged electronicus' and 'a mildly Shaggs-ian Kraftwerk' were some of the more creative descriptions of the group's sound when I Googled. There's certainly some wonderful electronic experimentation going on here, which made me wonder what future generations hold for hands-on electronic sound manipulation? A side issue, but see what you think of The Blue Man Group's new range of musical toys, and their flash equipment soon to be on the market already pre-circuit bent.