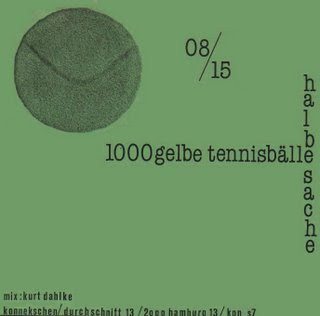 Thanks to Fred from Sweden for sending me this on CD. I don't fancy coughing up for an original just yet, not at the prices being asked. As for its exact release date, nobody is too sure. I've seen it listed anywhere from 1979 to 1981, and the same goes for the Lorelei 7" by Die Lemminge. What can be said is that this is the work of Andreas Thein, before he joined Propaganda and reworked TG's Discipline, got snapped up by Paul Morley for ZTT and had Dr. Mabuse climbing the UK Top 30 back in 1984. Yes, this is earlier and much stranger stuff, aided by none other than Kurt Dahlke (Pyrolator, Der Plan, Ata Tak etc.) on mixing duties. Thein would soon befriend another Düsseldorf New Wave scenester called Ralf Dörper, found playing in S.Y.P.H. and Die Krupps at the time, to form Propaganda as early as 1982. 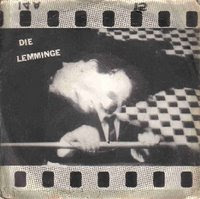 Both cover sleeves to Dörper's solo releases steal imagery from David Lynch's Eraserhead (1978) movie. Particularly striking is the cover to Lorelei, a single he released by the name Die Lemminge on Pure Freude, around the same time as Thein's Tausend Gelbe Tennisbälle. If anyone has a copy of Lorelei to sell, do get in touch (see profile), I'd like to hear from you. Tennisbälle was released on Konnekschen Records, the label run by Robert Nitz, a committed punk rocker from the Hamburg scene. The electronic drum sequence, especially on the A-side, imitates the hit of the racket and the rhythm of play during a tennis match, with the occasional match point sample faded in. The tennis game acted as metaphor for physicality, control, structure and belief, characteristics of post-punk and New Wave that became an attitude and stance German artists would tend to exemplify the most. Halbe Sache, on the other side, is a brief exercise in poly-rhythms, minus the vocoder. Wearing its Kraftwerk influence firmly on its sleeve, this is the EBM style before the term, and far more playful than the stricter rhythms Nitzer Ebb would later pioneer. And Dörper's Die Lemminge single? Well, someone out there must have it...