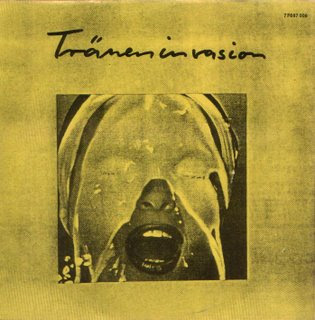 This is Holger Hiller at his most charmingly odd. Two brief minimal tracks for Peter Hein's Weltrekord label (WER04) way back in 1980, before that name was sold to EMI and before Hein set up the bizarre Sneaky Pete Records, where each number for each record was apparently a mate's telephone number or car number plate. 'Sentimental' is written by Hiller and the ex-DAF/ Fehlfarben member Michael Kemner. Incidentally, Fehlfarben's 'Grosse Liebe' maxi-single was the first release for Weltrekord, and is also well worth tracking down. Holger Hiller is most famously known for being the singer with Palais Schaumburg (named after a state government building in Bonn), whose turtlenecks and wonky foot-work was beautifully captured by David Cunningham in this 1982 video. The b-side 'Herzmuskel' is a reworking of the song that can originally be found on Hiller's Ata Tak/ Warning Records single, released earlier in 1980. There is also the Fähnlein Fieselschweif record that Hiller produced, round about the same period, for Luna Park. And what about this video from Hiller's pioneering sample-based 1984 period?