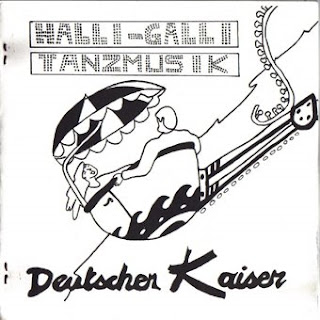 From the southern Ostalb region of Germany came Deutscher Kaiser, a rather obscure New Wave group that found local distribution in their home city of Aalen for their gothic minimal klang sure to wet the appetites of a few analogue synth fetishists out there. Mannschreck pressed the first edition of this EP, the band funding a second batch themselves, so there's white and black label versions of the vinyl. I'm also told the group were big fans of Mute artists, Fad Gadget and Depeche Mode especially, as their label name is a nod to DM; this is more apparent on Tempo! Tempo! (for their Mode label), a less remarkable but chart-friendly 10" followup with various coloured vinyl editions. I'm particularly fond of this earlier effort. In general, I'm fond of the way such cold and dry musings from these years were still packaged up like pop singles on a 45 and left to rub shoulders with the indie hits of the era.
Other rarities that relate to this group include a one sided clear vinyl mystery disc entitled Arm & Hand, a single by Didi & Die Herzschrittmacher, and an EBM smasher called Follow The Rainbow by Joe Machine. Vinyl On Demand gave away free copies of the two DK records as bonus to membership in 2004/05 and one of the members is now a huge success in the business world. For the NDW archives (posted in full recently at Ezhevika Fields).

Is there a chance for a reup? It would be wonderful