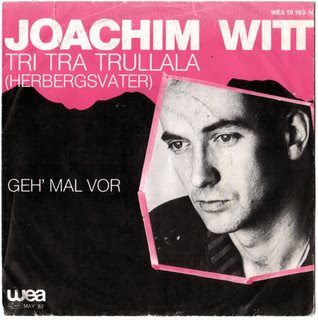 I said I'd post some very cheap vinyl from the NDW underground for a change. There's several decent 7"s and LPs I could choose from that I've picked up for no more than 1 EUR in the past, most of which is major label, so I won't dwell on this too much. Tri Tra Trullala was one of several curiosities I saw posted last year on Matt Woebot's Underground NDW 1980-1983 list of findings. Not sure what to say about Joachim Witt. He released some rather special and some rather not so special music during his lifetime (Der Goldene Reiter still a cult NDW hit), and, of course, very popular for it. So I was pleasantly surprised when I stuck this on. I could be miles out, but is this song about the merits of an industrial solvent called Trichloroethylene that degreases your metals (I am, indeed, miles out on that one, see comments)? If so, it reminds me a little of an equally brilliant British post-punk single by Tea Set, which featured a hand-clapped chorus demanding that the Kodak Tri-X Pan was the very best for producing your panchromatic film black and whites. My love of old school punk 45s leaks into New Wave slightly; you really want this on a 12". And some may think the b-side is a bit run of the mill for this page, and they'd be right, but the chorus is so catchy it'd be a shame to leave it off. This one was apparently engineered at Inner Space by Rene Tinner, Conny Plank's right hand man. New Wave classic!

First things first: A big thanks for all this stuff.

Secondly you are miles off on the topic of this song. the text doesn't really make any sense. (the singing in this song acts more like an additional instrument in my opinion). the text parts are:

hey kids, drop it, are you completly crazy? [obsessed could be another translation]
i am your hostel-warden and tell you: hey, hey
tri tra trullala.
[this is like a german kids nursery rhyme]

you are right though about his music. it is pretty strange sometimes, especially his current stuff. but his song "Der Goldene Reiter" is still a cult NDW-anthem (for the more commercially oriented - but I also like it. though this number is better) and he is still around and on German television sometimes.