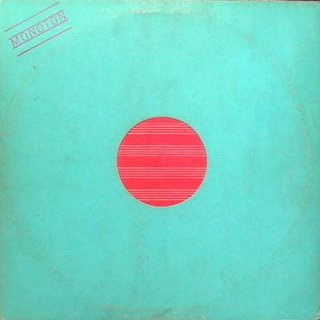 Offering a download link to Konrad Becker's music taps into some of the politics of info-streaming that Becker has highlighted over the years, particularly through his non-profit organisation Net Base, and its support for the right to flow information freely across the web. Questions on censorship still generate debate, and in relation to music downloads it's skyrocketed, particularly amongst industry types. Becker has never been concerned with music as business though. The Monotonprodukt moniker suggested the task at hand was partly to recontextualise the monotonous product symptomatic of the mainstream. Edinburgh's Fast Product pulled a similar stunt (Fast's Mutant Pop LP is at Post-Punk Junk). Label boss Bob Last and his 'interventions in any media' supplied its consumer with all sorts, mainly ravishingly designed LPs but, and here's the catch, in very limited editions. Monotonprodukt's approach went one step further, and was far more clinical and sophisticated, retaining a cold faceless Teutonicism as it went.

Konrad Becker's main interest was converting metamathematischen strukturen into music. Each interdisciplinary program that bared the Monotonprodukt name existed via a new culture-synthetic medium, be it a concert/ installation, video, or cassette, and each would produce its material from arithmetic. Becker was his own 'subjective scientist' carrying out his electronic operations as part of an institute he founded and named Wissenschaftliche (Scientific) Sensation.

Monotonprodukt dates back to 1979 with a cassette known simply as 01. Its tightly wound oxide-coated tape held by its cheap plastic case was merely another medium for this all-round multimedia artist/ writer to document and present his craft. Though situated in Vienna, a city steeped in Gothic-Romanticism preserving its history as it modernized, Konrad Becker just about showed up on the early NDW radar, his electronic work bearing similarities with other Germanic sound designers of the period such as Conrad Schnitzler, Harald Falkenhagen, Ralf & Florian etc. This is his debut LP, number two in the Monoton production line. It is the sound of him almost contemplating a forthcoming masterwork, or perhaps pondering a future mindset and head space in which people could allow for sonic repetitions to enter their living environments, as complimentary to their strange electronic netherworlds, like Orwell predicting helicopters would take off.

Konrad Becker did not search for life's numerical answers alone. He often enlisted the help of musicians Eugenia Rochas and Albert 'Ali Krawalli' Griehmann, formerly of Austrian punks Chuzpe, and later on Daniël Leeflang/ DJ Dano. Becker himself guested on the self-produced Tausend Seen 12" by Dämmerattacke, New Wave minimalists from lower Austria, on the Panza-Platte label from 1982. After a second cassette (03 in line) titled Neujahrskonferenz 80/81, a split with sister project Wissenschaftliche Sensation (the Ich Weiß Nichts 7" (04) it produced can be heard in Real Audio here), there was the Gesellschaft für Wissenschaft & Volkstanz (Society for Science & Folk Dance) project, furthering his exploration of psychosomatics. According to Christian Höller, from the Lost and Found article (translated by Timothy Jones), Becker performed an 'eight-hour-long dismantling of the sound barrier... in the Virgil Chapel under Vienna's Stephansdom' in June 1981, an exploration into sonic art that sounds like the kind of installation work Disinformation produce today.

As for this record, if DJ Food's Raiding The 20th Century, a plunderphonic compression of trends over time in electronic music, acted as the overground express journey through Words & Music, with Paul Morley your conductor/ host, then Monotonprodukt is its nightlong slow service soundtracking Morley's thought process in piecing together the connections between Alvin Lucier and 'Can't Get You Out Of My Head'. Like Lucier and Ryoji Ikeda after, Becker was interested in human perception in relation to the physical characteristics of sound. His greatest achievement was undoubtedly 1982's self-released double-album, finely tweeked and reissued 20 years later as the definitive Monotonprodukt 07 20y++ CD on Montreal's Oral label, its re-release perhaps inspired by its inclusion in The Wire's 100 Records That Set The World On Fire (When No One Was Listening), published in 1998. Becker's electroacoustic conversions from roots, powers and periods, pi factor, Fibonacci series, fig tree numbers, and 'magic squares', was a fine precusor to the digitalia and minutiae of today's laptop processed sound. Due to its minimalist/structuralist sleeve design and trancelike electronic repetitions, it went one further than predicting techno as Kraftwerk had done beforehand. In hindsight, its calculations for the post-techno habits of the Mego label were spot on.

As it is bootlegged, I have no idea where you'd find a copy of the 02 debut (it has not yet resurfaced). Recorded August 1980 at Monoton Studio Wien, a small handful only were pressed onto clear blue vinyl. This is a perfect chance then, to sample Becker's pre-Monotonprodukt 07 masterwork, its sound an equally fascinating series of vibrations on the lines of a musical stave. (download) - link removed by request, see comments
Eingestellt von martinf um 00:32

The MONOTON 02 was also reissued
by the canadian label ORAL.
Both records are great.