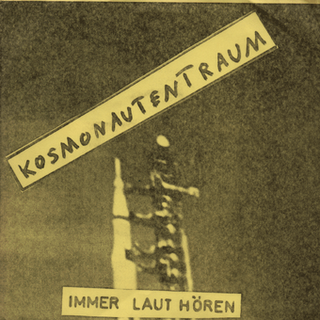 Like with most German punk, due to the language barrier, I don't think I will ever fully 'get' Kosmonautentraum. From what I can hear, they had a strong vocal delivery and political slant, but one to which the music was subordinate to, leaving foreign ears left in the lurch, so to speak. If your German is up to it, try the Livorno 1956 12" on ZickZack, from 1983, a superbly thrashed out and volatile EP, and one that's, just possibly, a strong case for vocalist Ziggy XY (aka Michael Jarick, one time member of Der Moderne Man) as Hanover's industrial answer to Mark Stewart and The Pop Group. A sweet homage to the band can be found here.

Going back through the Kosmonautentraum catalogue, and skipping all records in which they perform as the archetypal guitar-bass-drums-vocal four-piece, we end up right at the beginning, with the 'Der Deutsche- Immer Laut Hören' debut, Ziggy XY's self-financed solo EP. Ziggy was writing for several underground Berlin fanzines at the time, and, like Thomas Voburka's Exil-System work (see post below), the 'Der Deutsche' EP was released in accordance with the independent Monogam label. Monogam was partly run by Michael Vogt and Elizabeth Recker (who secretly made the Rainy Day Woman 7"), who both worked in Burkhard Seiler's Zensor shop in Berlin. Zensor was a label and a record store, much like Rough Trade in London, co-owned by Frieder Butzmann. A quick question for my German friends: where was Zensor exactly located in Berlin?

Recorded in Ziggy's living room, this 7" apparently didn't go down too well. Even Alfred Hilsberg practicularly called Ziggy an idiot in October's Sounds (the German version of the mag), 1980. This is unlike all other Kosomonautentraum work. Vinyl On Demand re-issued it as part of the 'Unerhörtes Ungehörtes' early works collection last year. Starting very quietly, it builds into a curious examination of the more subtler qualities of noise and electronics, with a threatening air of chaos about it. Bloody experimental.

A. Kosmonautenträume
B. Nr 1 and Nr 2 Alltag

the zensor shop was located in Berlin, Belziger Straße, in the back of the "Blue Moon"-shop which was dealing with clothes for teds and rockers. more information about the zensor is available here:

i've been told the low volume at the start of the kosmonautentraum-ep was because the home-made tape wasn't mastered at a professional studio but sent directly to the pressing plant (i think it was Pallas in Diepholz) and it had such a low volume that at the beginning of the mastering process they couldn't here anything so they turned the volume up during the mastering process. when ziggy received the test pressings he probably liked it and didn't ask for correcting the mistake. also the ep has no correct labels because the printer made labels for 12inch records not for 7inch records but again ziggy didn't complain but just sticked the labels on the inner sleeve

i don't know much about ziggys writings for berlin fanzines, i only know his fanzine HEUTE which he published together with EKT (guitar player for Moderne Man and drummer for Kosmonautentraum) and some of his poems. the lyrics on the ep roughly translate as:

the german basically is lazy, not willing to work, fat, greedy, doesn't likes to be disturbed, wants to own a home of his own, doen't wants to be noticed, is a conformist, is normal, is a low-brow, is stupid, is a coward

wants to have the Kaiser back and talk german, makes holidays in mallorca, must have a tan, reads only a certain newspaper, hates children, loves cars, doesn't read books, polutes rivers and lakes, only eats icebein and sauerkraut