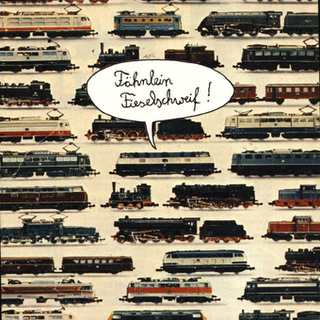 Fähnlein Fieselschweif was a bizarre orchestrated project involving a bunch of Hamburg post-punkers supplied with some smarties and unusual instruments and told to go and make a record because it'd be trendy and someone would pay for it no sweat. The result? Pluto is music for aliens, Reh beats out the kind of rhythms your heart would make if you saw one, and as you check the back of the sleeve to try and work out what the hell is going on, bingo, Holger Hiller was pulling the strings from the mixing desk. It all sounds like a smashed up train set, and the strange journey concludes with a Kinderparty, a short jam on the Casio VL-1. The VL-1 tone was a weapon of sorts and an absolute compulsory battery operated child's toy for the sarcastic German New Waver. Even Matthias Schuster, back turned away from the flash of the camera, gravely holds one up like a knife on the front of Atemlos. The VL-1 jam is probably now a compulsive ritualistic past-time for the German New Wave crowd (albeit balder and more wrinkly nowadays), perhaps whipped out during a picnic or motorway pile-up for a bit of Da Da Da?