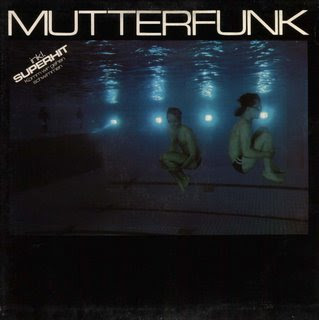 High time we had a small dose of avant-funk acting as laxative to those constipated Düsseldorf rhythms. Mutterfunk took a modest slice out of the downtown NYC pie, though refused to let it budge the weight of their Teutonic skank. Whichever part of the globe the No Wave meets Disco style might've reached though, it's a sound that, by 1981's closure, was heading back towards the shore, about to get washed up and recycled into a new splash in town; New Wave the second coming, with its diet of hairspray, glossy mags, and MTV on the catwalk. A group or two were still fighting the good cause but try as they might, they wouldn't knock the rise of New Pop out the water. They'd still throw stones from the sidelines though. Nine times out of ten they'd jump ship altogether. The Mutterfunk vibe was less a gatecrash the party, and more a we will fight them on the beaches. Yet the group just chucked it down on tape, no preparations, precautions, you sort it out.

There is a slight ebb and flow to Mutterfunk's cyclical patterns. Like a float on water, you're not quite sure where it'll end up, but dive in you must, because amongst growling aqua basslines and drowning saxophones, slippery synths and guitars like seaweed, you'll find a tightly arranged mixdown of short songs about El Presidente, giant lungs, and how, ultimately, 'every wave is a dead wave'. Includes the 'superhit' Komm Wir Gehen Schwimmen (Come, We Going Swimming), apparently. Before you know it the record's finished. I'll let you research this one for a change!