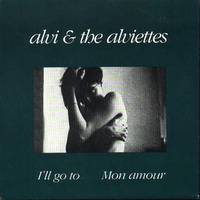 Following on from the Wirtshaftswunder and post-punk from Limburg special, we have Alvi & The Alviettes and Die Hornissen. Both were the studio creations of Detlev Kühne (Walter Dahn the second half of Hornissen), with help from Tom Dokoupil. Alvi & The Alviettes, with its wonderful I'll Go To A-side, was recorded in the Wirtschaftswunder studios in the small town of Limburg, part of the Limburg-Weilburg district of Hesse in Western-central Germany. For more information on the groups that originated from this town, read the revised Wirtschaftswunder post, and check the informative Limburger Pest site. You can also hear more Dokoupil related works such as Die Partei and the band Die Radierer in the two Mein Walkman mixes below. 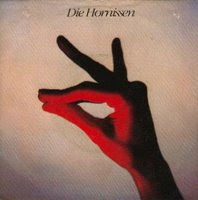 Rosita Blissenbach was Alvi's singer, also lending her delicate voice and musicianship to Kühne's (and Dokoupil's) other two projects Die Hornissen and Quick Culture, both on 46 Records. I'm guessing 46 Records was Dokoupil's own private label, though all three plates were jointly licensed to Paradoxx Records. Kühne went on to score music for animations such as the French Les Animaux du Bois de Quat'sous in 1992, and Dokoupil now produces a number of TV and film scores from his Whitehouse Studios in Köln. Die Hornissen relocated in Cologne to finish their album and this is its single. Working from Conny Plank's studio, Holger Czukay was brought in to mix what ever he could muster up from their dire Velvets cover, Pale Blue Eyes, on the A-side. The single was saved from anonymity by one of Dokoupil's and Kühne's greatest masterstrokes, the Hallo! Hallo? (Time Tunnel) (or Zeittunnel) instrumental, which ended up on New Deutsch. This is the re-mastered recording from Thomas Bär's and DJ Hell's compilation. I don't have the single myself, I'm actually unfortunate enough to own the whole LP, one of the worst NDW records (along with R.E.K.) in my collection, and a classic collector's pitfall. As for the beautifully soothing Alvi & The Alviettes B-side, the French piece Mon Amour ended up on a rather interesting early NDW music compilation called Auftakt in 1984, the first LP on Cherry Red's short-lived side label, focusing on Germanic groups, called the East West Trading Company.

Tom Dokoupil was very prolific in his early musical activities. He also set up the Tausend Augen label, producing and overlooking all four of its releases. For some reason or other the catalogue begins at 011, and I suspect there might've been some major label finance or distribution before it quickly collapsed. There wasn't a band on the label that originated outside Limburg. Also, I think a re-issue priced at 0.50 EUR of the Alvi & The Alviettes 7", but with a plain sleeve, might still be available from AtaTak here. 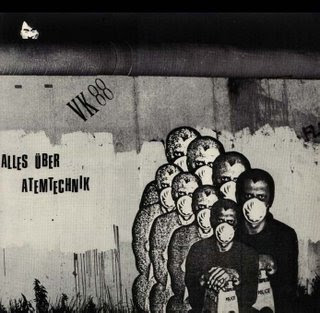 Johannes Vester grew up in the small fairy-tale like town of Bodenwerder, a woodland area in Lower Saxony, where both the Pied Piper and the Baron Münchhausen legends were born. Another famous export from these parts were the Brothers Grimm, whose children's folk tales were an influence following Johannes' own mystical adventures into the world of music, and down a career path that would frog leap from Kosmische Musik to Neue Welle with apparent ease.

In 1971, Vester's early group P.O.T. (Part Of Time) opened a gig for Can. Can brought the group to Cologne, where they eventually ran into Klaus Schulze, offering to cut them a record over in Berlin. Two members bottled it, returning back to the safety of Lower Saxony, but Vester and the brothers Ludwig and Ulrich Papenberg took Schulze up on his offer. Inside a dark basement flat in Claudiusstrasse, near the Tiergarten central park in Berlin, a walled in city full of Cold War tension, student demonstrations, and a burgeoning drugs and art-school scene, the drummerless trio set about naming themselves after the material on which the city was built, and recording one of the all-time Kosmische ur-folk classics: Golem. Even though it was one of a few new records to showcase the Artificial Head Stereo Sound, or Kunstkopf-Stereophonie (beyond Quadraphonic; a concept Stockhausen would have originated), it was a commercial flop at the time, but now cherished by obvious admirers for its otherworldly medieval mantras and bent English poeticisms, merged with VCS3 synthscapes and a haunting atmospheric sparseness.

That was Sand, circa 1974. With Golem, according to the Ultrasonic Seraphim liner notes, Vester intended to awake the spirits of the imagination with 'a minimal manner of expression'. By 1981, this was still the case, but to keep up with the times, they'd be no more childlike pre-industrialised sound worlds created by such methods. This reductionist technique also meant stripping the sound of its previous turn on, tune in, drop out associations. Vester's lyrical vision now meditated upon a cold electronic pulse, indicative of a back-to-basics approach, popular at the time, and born out of the radical rethink the punk movement enforced. So, Vester scrapped the broken English in favour of his native tongue, and delivered one of Germany's most iciest and emptiest minimal synth records ever to hit wax in the early 80s. Maximum results achieved by the simplest means, here is all fifteen minutes of the opener Wir wollen, daß Sie glücklich sind.

Distant echoes of Kraftwerk, Laibach, Monoton, and Suicide seep in like hypnosis, and I think VK 88 best fulfilled Vester's desire to evoke the alchemy in the Berlin air of the late 1970s, early 1980s. I only wish I had a copy. This is one that I don't own and had to snag the artwork and music off a kind soul for; the record simply never shows up, not at a reasonable price anyway.

For those fluent in the language, what can be worked out from the text sheet (Paule's scan)? 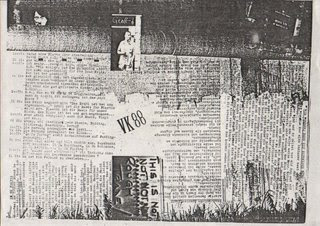 It seems that there are Krautrock fans and then there are New Wave fans, and never the twain shall meet. Compared with Sand, Johannes' and Ludwig's Alu were a different proposition altogether. I understand the project is seen by many as two talents hopping the bandwagon. Some other discrepancies; there is often too much guitar on an Alu track, you can't waste killer artwork on a live album, and the Gothic undertones and throaty vocal work of Nadja Moldt can be tough going. Having said that, the pre-Moldt unreleased 1980 debut, issued as Autismenschen in 2005 on Chicago's Crippled Intellect Publications, is excellent, especially with David Tibet's liner notes following on from his brief introduction for the Ultrasonic Seraphim collection, the latter also featuring the unreleased Johannes Vester And His Vester Bester Tester Electric Folk Orchestra! Alu's DIY single from 1981 is included on the C.I.P. disc, as is its b-side Liebe Machen, the most ridiculous reading of Willie Dixon's I Just Want To Make Love To You I've ever heard. It makes me wonder what happened during the six-year gap between Golem and Autismenschen. Minus Ulrich, you'd never know it was the same group.

Hi, can you reupload this gerat series, please? Viele danke!

Anyway, it's the VK 88 post that I would love to listen to if you are able to repost it (Mutant Sounds is the only other place and that's long gone).