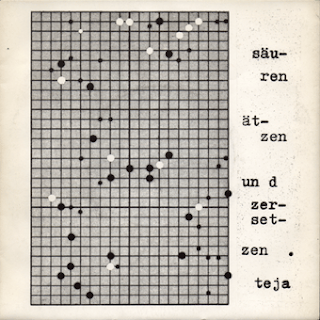 Little is known about Teja Schmitz (a Google search churns up a contemporary French musician of the same name). The only recording he released into the wild was this incredibly eerie (Dubstep on acid, anyone?) self-produced and self-released slice of Neue Deutsche Welle period DIY, circa 1980-1. This does not appear to be a homemade recording however, as the sleeve claims it was mixed at the Klangwerkstatt studio in Düsseldorf, which happened to cater for many German punk/New Wave groups of the time (Male, Fehlfarben, SYPH...). The results sound as if Teja may have been an engineer or veteran from the Krautrock era. The slowed down dub techniques echo Conrad Schnitzler's lone electronic voyage through the hazy years that blurred German Kosmische musik into German New Wave. The b-side turned up on a flexi pop compilation ('A Tribute To Some Bizarre Vol.2') some years later. Teja performs all and to cap it off there is a personal thank you and signature on the back of the record. Very nice.