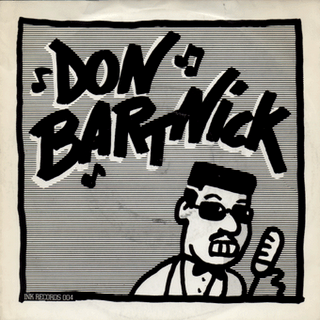 Out of all the small NDW independent labels, the most obscenely hip was probably Mike Schmidt's Ink Records. Schmidt's group Croox was the first release on the label in 1980, with the highly sort after 'A' LP (Ink01). This is an NDW classic and, sadly, now rare as hen's teeth. Unfortunately all I have is a bad cassette rip. :(

The first 7" on Ink was this incredible piece of German underground goofiness by Don Bartnick (Ink04). 'Gefährliche Karriere' is the highlight for me, if only for its English 'Dangerous Career' translation. Fittingly, Bartnick never released another record, although his earlier contribution to the ridiculous 1980 NDW Christmas record, Denk Daran, on the Überblick label, can be found here. 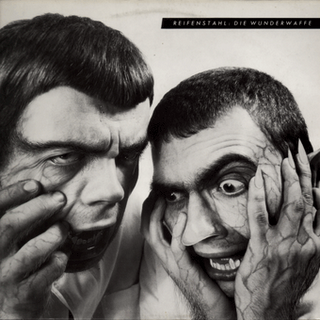 What gets my vote for the most bizarre group on Ink is Reifenstahl. Gerd Gaida and Matthias Rapp pose as a duo on the cover (a typical NDW approach), and play all instruments on the record, though additional members of Croox may be involved on some tracks. After all, like jazz players, it was not uncommon for members to drift in and out of various groups during the highly versatile post-punk era, especially in the experimental Düsseldorf scene, circa 1980. Reifenstahl's Die Wunderwaffe LP was the sixth release on Ink Records, 1981. Their Residents inspired chaos can be heard on these three choice cuts:

Some of the items from Ink's brief back catalogue can be found as part of a WFMU playlist put together by Markus from Hamburg, Germany. Nearly all of the Ink tracks aired are from the 1982 Partysnäks LP (Ink010), which apparently acted as a soundtrack to an abandoned film project titled Die Tanzbeinsammler. The Google translation for this one is particularly great: 'The Dance Leg Collecting Tanks'. Wtf? This is where I call on any German speakers (martinf?) to help translate some of the inner sleeve! 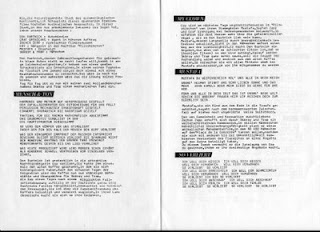 From what I can make out Don Bartnick played a car dealer in the film. And I'd imagine that each track lends itself to the film narrative in some curiously angular way. Here are my two favourites from the record, hope you enjoy:

You asked for it, so don’t blame me for any brain damage after reading the following words:
Party Snäks, music from the movie „the dancing leg(s) collector”
Summary of content:
Location is Rio in South America.
Don Bartnik, a salesman for used blue cars, is in financial troubles. He dreams of a career as an entertainer. In his dreams someone suggests a stage act with fried chickens. So Bartnik starts to practise a mechanical dance with 2 chickens from the Netherlands called Skänky and Trap.
Don Bartnik is in love with the nightclub singer Gay. She once presented him the old suitcase in which they met. Now this suitcase is stage and home for Skänky and Trap. One day Gay has a parachuting accident and lands on the roof right above Bartniks window where she secretly watches his training with the chickens. She is amused and confused about Bartniks misuse of the suitcase.
The next day, while Gay talks to herself, she is overheard by 3 regulars of the “Pilsstübchen”: Mustafa, an oil sheik, Jochen Zepp, a wrecked film producer, and Graf Grenzgang, an agent with higher orders. Mustafa sees his chance to escape total boredom and offers Bartnik a very bad deal. Bartnik declines with a nod, but Skänky and Trap get angry because they want to get out of the suitcase, so they try to get on good terms with Mustafa. But Mustafa is depressed by Bartniks decline and commits suicide.
The mean and corrupt Jochen Zepp hopes to have a worldwide comeback with the help of Skänky and Trap. He plans a monumental movie with 50.000 chickens dancing on the “Place de la Concorde” after taking part in a regatta on the river Seine with other heavily masked animals. So he tries to get Gays affection with three-biguous offers.
The politically confused Grenzgang detects a secret code within the dancing routines by Skänky and Trap and tries to recruit Bartnik for the secret service. But Bartnik thinks Grenzgang is just an undecided car buyer.
In the evening there is a big party at the “Pilsstübchen”. But some kidpunks from Hamburg who travelled with the HSV to a soccer game abroad don’t like the music and wreck the place. During the muddle Zepp and Grenzgang both try to get Bartnik drunk. When Gay smells the money involved she tries to get Bartniks affection with unmistakable singing.
Bartnik has only eyes for Gay and Zepp is so frustrated that he thinks about offering the main character of the movie to a blind canary. Grenzgang tries to convince Gay to have sex with Bartnik so he can fetch Skänky and Trap. But Gay declines so Grenzgang swaps the cherry in her cocktail with a toadstool. Gay drops out and nibbles on a piece of Reifenstahl.
Bartnik, who thinks he is making the best deal ever, acts shockingly, annoys all the other guests and wrecks the place even more. When he is drunk like his cars are blue he finally is brave enough to have sex with Gay.
At this point the shooting of the movie breaks down. Jo Fuchsberger, acting as Grenzgang, refuses to work any further until he is allowed to act as Bartnik. When his demand is refused he leaves. The next day the crew discovers the location wrecked with kakao powder and all finished scenes ruined with dumpling sauce from South Tirol. This is the end of the movie. Fuchsberger is dropped by the producers and has to earn his money with third class tv game shows.
Sounds like a great plot for The Da Vinci Code 2 :-)) (download)
Eingestellt von martinf um 12:53

Wow! That was quite the story telling! Im quite amazed at all the things you've done! No wonder your soo happy! Well I hope you had your fun and excitement. In the mean while, as winters kicking in right now, we might be expecting some change! A change in weather hopefully to the better, it either has to rain or not! Mother nature is playing games with us :}
-Much LoVe