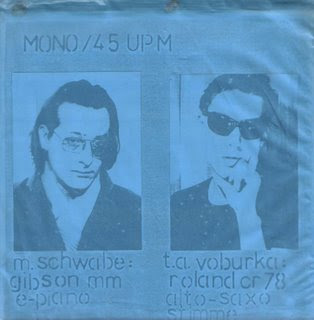 The place to go in West Berlin, circa 1979-81, is said to have been the underground venue SO 36 in Kreuzberg, documented by Manfred Jelinski on the recent Berlin Super 80 DVD. This was a hot spot for anarchist activity that filmmakers, musicians, and art students alike no doubt made their own. Frieder Butzmann, Die Tödliche Doris, and Einstürzende Neubauten, to name but a few, were some of the big names on the scene, as the strength of the cassette culture and underground labels sprung up like weeds through concrete. Legend has it that Thomas Voburka had a job in the same Berlin restaurant that Michael Schäumer (P1/E) worked in. Inspired by West Berlin's Geniale Dilletanten movement (also the name of the '81 festival and the manifesto published by Wolfgang Müller (Die Tödliche Doris) in 1982 (link)), Voburka decided to go for broke and release a record. Thus, Exil-System was born and the Mono/ 45 Upm 7", fronted by Vorburka and Michael Schwabe, was its debut in 1979. 500 copies were released only. Flash forward to 2003 and record collector Frank Maier had an idea. He would set up a label, call it Vinyl On Demand, and get this material back in print! Well, almost. The four Exil-System releases, all featuring Thomas Voburka, the mastermind behind the label, were grouped together in 2004 for The Exil-Sessions 1979-2004 LP. The only problem was, it was limited to 500 copies again. And so now the re-issue has become just as collectable as the original 7"s, even more so considering some VOD's sold out before the release date. Until a kind soul offers up a suitable rip of the LP re-issue (tracklisting here), we are stuck with my own bootleg collection, which is complete, but rather patchy, using several resources to pull the project together. But worry not, for, either way, we have the four Exil-System singles (1979-80), from Mono/45Upm, P1/E, Weltklang, & Hits Berlin, in all their primitive synth glory. Apart from the group P1/E (featuring Voburka, Michael Schäumer and the early Neubauten member Alexander Hacke aka Borsig), this is predominantly the work of the duo Thomas Voburka and Michael Schwabe. Both starred in Erwin Kneihsl's underground 1982 film Gemischter Salat ('French Dressing'), and Voburka furthered his own career in acting. Here's a taster of the Inspector-Clouseau-in-Berlin sound of the 'Vorwarts' 7". As for the rest, think a German Lou Reed and Jonathan Ritchman with only a beatbox and a couple of instruments found on a scrap heap. Killer.

This the best Vinyl On Demand release so far! It compiles all music (four releases) released on the Exil System label during 1979 and 1980. Besides that it also features a remix from 2004.

Mono 45 Upm is present with its two great and weird NDW tracks from 1979. Next to that Weltklang and Hits Berlin are featured with their minimal/NDW songs. But it is ‘49 second romance’ by P1/E that is the ear catcher of this record. This catchy minimal wave / elektro track could well become a hit again.

Also featured on the lp is the lesser, but still enjoyable, ‘Licht und Schatten disco mix’ version of this song. Too bad there is another remix of this small masterpiece on the lp, a 2004 dance rework. This track spoils the nostalgic mood of the album. But, besides that this is a great historical record for the true 80’s addict.

Allo, it seems the file is corrupt or some other thing ... great to see these NDW records here. Thans very much.

hi josef, the file is okay but contains some special charakters. probably you can open it with some other zip-tool like 7-Zip?

hello. Thanks for this great blog, and amazing music. I can't open this file with WinRAR though. I've tried downloading 7-zip (as it was suggested here)but am having a lot of problems getting it running. Is there another solution to this problem? I'd love to hear this band. thanks