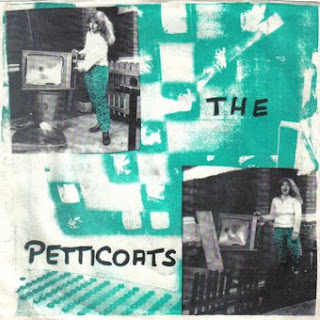 I'm not quite sure where Steff Petticoat was from. Where British groups such as Surplus Stock had strong connections with various labels and distributors in West Germany (you can tell by the sleeve info), judging by what I've read on the net for Stef Petticoat, I think she travelled to London from Bonn and managed to put out a record. And it's a real do-it-yourself humdinger of an ep. It may read The Petticoats on the front but she couldn't be doing with a backing group; she played all the necessary instruments herself in what I'd imagine was a pretty no-fuss kinda session at Street Level. Perhaps I should've uploaded I'm Free (sounding like a very claustrophobic idea of freedom) when Adam Curtis' The Trap was airing on the BBC, but here's the whole thing, all sounding like it's made out of cardboard:

The split single on ZickZack with Robert Crash from the Maniacs is quite different to this. I'm more interested in hearing a sampler the Petticoats were on called Scaling Triangles or better still the Peel session from the same year as Normal (same recordings?).

While I'm at it, can anyone recommend Jam Today's Stereotyping EP, an all-girl feminist group, on their own label Stroppy Cow Records?