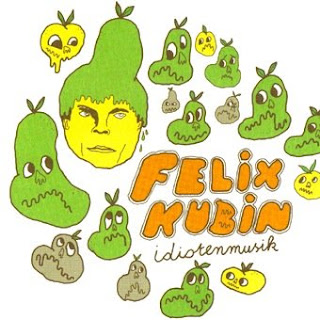 Well it might all just be a case of the Emperor's new clothes, but 20 Jazz Funk Greats quite rightly pointed out Felix Kubin as the real titan of the Deutsche Weirde Welle a few weeks back, and though I can't compete with that fine service to the man, I almost forgot, I do have one of his records I can plug.

Apparently Kubin grew up in health spas quietly telepathising his Die Egozentrischen Zwei project before a barter with an extraterrestrial lifeform set him up on a stairway to Idiotenmusik? That's if his website is anything to go by. Well I don't know anything about Felix Kubin really, but I do know if you compose your own story, cut out every word, and pull 'em out of a hat, you've probably got the whole Kubin lowdown sussed out better than anyone. However, I reckon that Deutsche Weirde Welle crown seems like a better fit for Harry Merry's bonce these days.

Dennis Tyfus did the artwork here, and Ultra Eczema the name of the label. I'll have to pull these mp3's down in a week, and possibly, later on, the whole Mein Walkman mp3 archive shebang (that stuff's been available for ages - not my musical creations remember). There might be a File lodge sound promotion these days in one of these, I'm not sure (just refresh the link)!

is there any chance you could repost this link? I just saw felix this weekend and he was so wonderful. idiotenmusik is hard to find, it seems. I would buy it but I think it is sold out.