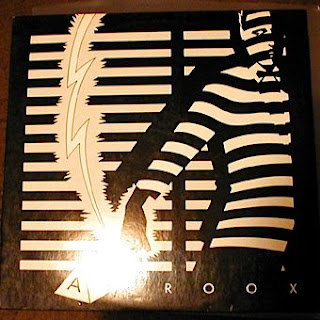 Croox, a New Wave group from Düsseldorf, recorded this album on a 4-track Teac between December 1978 and November 1979. In that time, the first cheaply recorded documents of D.A.F. and Der Plan had hit vinyl and were labelled up as ‘Art Attack’ product. Both were strictly independent releases and both sounded like a train derailing. Some were obviously inspired. Of course, Art Attack/ Atatak was the label borne out of Moritz "R" and co's own gallery space called Galerie Art Attack, located in the Wuppertal suburb of Düsseldorf. Judging by the name, the more obscure Ink Records had a similar founding in the arts. Mike Schmidt, head of Ink Studios, set up Ink Records in Kreuzstrasse, Düsseldorf in 1980 to release the Croox album I presume he had just finished arranging, producing, recording, and penning the artwork for. 'A' has turned out to be one of the more accessible new wave records from Düsseldorf for 1980, and whether in its time it had any success or not I’ve no idea, I doubt it very much in fact, but out of my NDW buying spree this year this record will certainly end up in the keep pile (priced at 5 EUR, you can’t really go wrong). This is essentially a pop album with some English sung lyrics and an upbeat tempo, but it qualifies for its inclusion on these strange pages with its slight clunky engineered sound and odd bits, suggesting one really needs to get hold of an old Volkswagen Beetle to play this out in to get the full effect.

More from this record later.

Anonymous said...
where are the other tracks? :(
nice stuff by the way!

Anonymous said...
Anonymous read the post. It says "More from this record later".
Rich this is a great record from the sound of it, thanks for posting it. Your NDW choices are excellent and have introduced me to this fantastic genre.
Cheers,
Ben
Eingestellt von martinf um 16:58