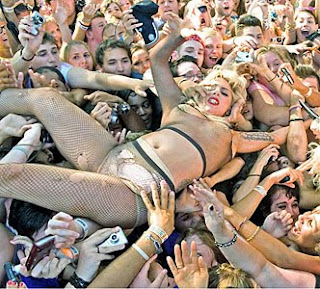 slutwave is a not-so-commonly used term referring to the 00's phenomenon: the domination of female electro-pop solo artists.
the whole thing pisses off people who claim to have a clue about music, since these slutty-dressed (but in real life cold ass business women) artists are able to sell their shitty tracks by drawing attention to their bodies and creating buzz by their trashy (they'd say edgy) costumes.
the term was probably invented and/or brought into use by Carles, blogger of Hipster Runoff.
Quelle: www.urbandictionary.com/define.php?term=slutwave

The 25 Greatest Slutwave Songs of All Time

24. Nelly Furtado "Promiscuous" (2006)
I can see you with nothing on
Feeling on me before you bring that on

18. Mary Jane Girls "In My House" (1984)
You can just make believe
When it comes down to makin' love, I'll satisfy your every need and every fantasy you think up

17. Jessica Simpson "Irresistible" (2001)
I know that I'm supposed to make him wait
Let him think I like the chase, but I can't

16. Pussycat Dolls "Buttons" (2006)
I'm a sexy mama who knows just how to get what I wanna
What I want to do is spring this on you
Back up all of the things that I told you

13. Samantha Fox "Touch Me (I Want Your Body)" (1986)
Hot and cold emotions confusing my brain
I could not decide between pleasure and pain
Like a tramp in the night, I was begging you
To treat my body like you wanted to

7. Peaches "Fuck The Pain Away" (2000)
Suckin' on my titties like you wanted me
Callin' me, all the time like Blondie

5. Britney Spears "Gimme More" (2007)
The center of attention
Even when we're up against the wall, you've got me in a crazy position
If you're on a mission, you got my permission

3. Christina Aguilera "Dirrty" (2002)
Tight hip-huggers, low for show
Shake a little somethin', on the floor
I need that to get me off
Sweating ’til my clothes come off

1. Ke$ha "Blah Blah Blah" (2010)
I don't care where you live at
Just turn around boy, let me hit that
Don't be a little bitch with your chit-chat
Just show me where your dick's at
Eingestellt von martinf um 23:47