This is one of my favourite singles from that period. The EP "On the Air" is the second record from this band who released 7 more records which I did not dare to buy for years because I feared that they would not have the same quality - and I was right. There was a small website (google (cache:www.torchsongonline.com/martinmossop.html) for some pictures) about the band and there "On the Air" and "Not Through Windows" are described as songs without refrains which offer any release from the constant built up tension (I think that was the same text you can now find here, but I might be wrong). The third song has not as good as the other two, but this is only my stupid opinion. Compared to the other 2 records I have The Lines were constantly changing their style so I'm not really waiting for the re-release of their music on CD as announced by Acute Records but I would have listened to their album "ultramarine" if it hasn't already been deleted ... 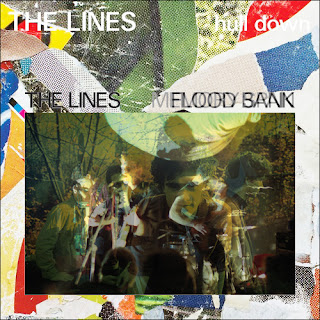 Update 2016-04-27:
6 years ago Acute Records released nearly all of the previous releases of The Lines on 2 CDs. Also on their webside they offer additional sound files of previous unreleased music which you download as one zip-file here (also I found download-links for Memory Span and Flood Bank). And now Acute anounces the release of a new The Lines-CD. "Hull Down" contains music of their third albunm that was never finished. Could be interesting. Ckeck out the thrack "Single Engine Duster" on soundcloud. Also I have to check out Rico Connings blog...
Eingestellt von martinf um 01:04

I'm definitely buying that Lines boxset if it comes out, I'm looking forward to it, sounds very ambitious, I've only heard one or two songs

The Lines music changed in a lot of ways during their few years, but there are consistent threads. Some of their music I took to immediately, while other releases I slowly warmed to. If you like On the Air, definitely check out the following ep, Cool Snap, which has a similar sound, brittle and angsty guitar based stuff. It will appear on the same CD as On the Air.